I’ve added to the gallery images of Sophie during last night event for Charlotte Olympia Handbags For The Leading Lady Launch Dinner.

Yesterday Sophie participated to the London Fashion Week for the Topshop Unique Show. Enjoy the pictures I grabbed.

Back in August Sophie attended a Screening of Barely Lethal. Appereantly the event was organized/covered by Just Jared only. So you can go over his site and see some pictures like this. 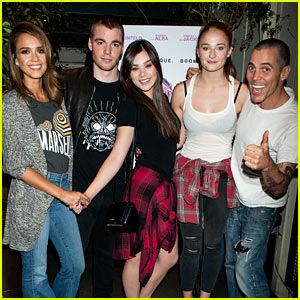 I’ve switched the MQ and added more HQs of the Fall Campaign Sophie did for Karen Millen. Enjoy!

Over the past year and a half, British-based retailer Karen Millen has successfully implemented a major rebranding transformation to appeal to hip, younger customers, both in the U.K. and worldwide. Following the recent openings of two major flagships (one in Knightsbridge and the other on Fifth Avenue here in Manhattan), the contemporary label kept up its momentum last week by teasing the trailer to its new Fall ’14 campaign video, titled The Journey, featuring a mysterious, red-haired leading lady, which elicited the response: “Who’s that girl?”

Today, the full film debuts here on Style.com, where KM is revealing none other than up-and-coming actress Sophie Turner (who is best known for her role as Sansa Stark on HBO’s Game of Thrones) as its face of the season. The brand assembled a creative dream team for the project, including director-photographer Glen Luchford; stylist Katy England; and It Brit models Rosie Tapner, Lara Mullen, and Brogan Loftus, who explore the vibrant East London neighborhood alongside Turner, wearing pieces from the latest collection. “The idea behind the campaign is to bring our brand world and our woman to life. It is designed to give an evocative snapshot into the energy and creativity of London, where our inspiration is drawn from and the KM atelier is based,” explained Gemma Metheringham, KM’s chief creative officer. “The KM woman has both style and substance: She’s memorable, with a strong character. Sophie is not only very talented, but she also has a great personality and powerful energy, in addition to being incredibly beautiful.”

To coincide with its #KMTheJourney campaign, the retailer will also host a pop-up at its Brompton Road location for six weeks beginning September 1. There, it will offer a curated selection of 15 statement-making fall coats that shoppers can customize in a variety of luxurious fabrications. Below, Turner took time out of her busy filming schedule (in addition to currently shooting season five of GOT in Belfast, Ireland, the talented 18-year-old will also appear in two forthcoming films, Barely Lethal and Alone) to chat with Style.com about her Karen Millen campaign, personal style evolution, and more.

END_OF_DOCUMENT_TOKEN_TO_BE_REPLACED


Another Me Gallery Update
Posted by Staff     No Comments

The gallery has been updated with posters, stills and behind of Sophie in Another Me.

August 21st, 2014 Another Me Behind the Scenes Movies Posters Stills

IGN covered some portraits for the Comic-Con 2014. I found it out only today and got the one of Sophie.

I’ve added one HQ scan from the TV Guide issue of Comic-con coverage.

Visit our photo gallery with over 38.700 photos and growning often!
Sponsor

Sophie Turner Fan can’t run without your help. I need money to improve the site with which I can buy pictures, purchase magazines to scan and other resources as well. Please donate if you want to support this site. Every little bit helps! Any help will be more than appreciated.

Jane has to fight for her life when her plane crashes on a remote snow-covered mountain. Paul is the only other remaining survivor and together they embark on a harrowing journey out of the wilderness.
Official
News
Photos
IMDB
Broken Soldier

Nine noble families fight for control over the lands of Westeros, while an ancient enemy returns after being dormant for millennia.
Official
News
Photos
IMDB
Sophie Supports
WOMEN FOR WOMEN UK